The Eight of Cups cards is what tarot card players call a Minor Arcana in the tarot deck. In Latin countries, the cards are used as a game, but across Europe, tarot games aren’t that well-known, and tarot decks are primarily used for divinatory purposes. The Eight of Cups card derives its interpretation and meaning from the original Rider-Waite deck.

As you probably already know, the Four of Cups is a card that often indicates a time of sadness or a need for emotional or mental support. It’s not a particularly pleasant card, but its meaning is that you are in need of a friend or loved one. The Eight of Cups suggests you have a lot of questions that you are afraid to ask. 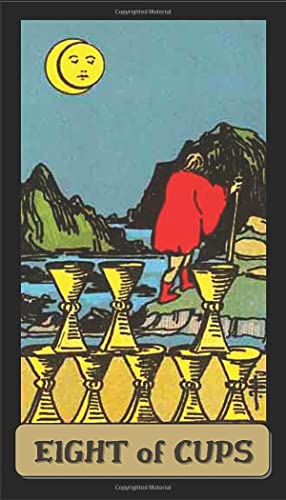 The imagery of the Eight of Cups depicts a man walking away from the cups standing in the foreground; here, the cups are the main object of observation in the frame as they’re closer to the picture and very far from the man. The man is hunched and moving forward in a very negative body language depicting his sense of hopelessness and helplessness.

This disorientation and mismatching are done deliberately in the imagery to express the fact that the man in the picture is experiencing a sense of loss and disappointment. One missing cup also represents the sign that the man lacks emotional fulfillment and wholeness.

The card Eight of Cups background holds a mountain towards which the man is walking, leaving the eight cups, his everything behind. There’s also a river flowing in the backdrop at the foot of the mountain.

The moon is shining dimly in the background, and the sky gives the vibe of a starry night. Here, the mountain range in the background indicates the awareness that the upcoming journey of this man will be tough and tiring, though it is important for his development. The river symbolizes his emotions and their intensities.

Lastly, the night sky lit with stars and moon fulfills the wish of the man to stay anonymous and blend into the night, turning invisible, and he prays that he goes unnoticed and undisturbed on his journey ahead.

In the general context, the upright meaning of the Eight of Cups card depicts abandonment and represents being left out or behind. It can indicate walking away from people and situations in your life, or it may hint at abandoning certain plans in your life.

The emotions that are depicted by this card are disappointment, escapism, turning your back on, and leaving harmful situations. Though these actions may seem negative, these are necessary to ensure that you’re getting rid of anything that could prove harmful to you in the future. Even though you have to suffer for a short time right now, you’ll be able to reap its benefit in the future. The actions can also be

The Eight of Cups card in the reversed position depicts stagnation in the general context. It indicates that you’re accepting your lot in life and have given up hopes on improvement.

This can cause you to stay in a bad situation which is probably making you unhappy, but you’re keeping yourself in it because you’re afraid of moving on, and the thought that the future might hold something even worse frightens you. You may appear perfectly fine and happy with the people around you, but truly, you need to let this all go and get a fresh start.

You have to realize that you ought to let go of certain people and places to go forward in your life. You’re resisting the urge to do so because you fear that change might do you harm. This card in this position also serves as a sign that maybe you’re running away from bad situations or maybe you’re afraid to take a leap of faith.

These examples also hint at one’s lack of maturity, low self-esteem, and very downgraded self-worth. Alternatively, this card in the reversed position can indicate traveling, living abroad for a long time, and returning home depending on one’s situation.

Eight of Cups- Yes or No

The answer the Eight of Cups card provides in a ‘yes’ or ‘no’ reading is a ‘no.’

The central and core theme of the card is getting away from bad situations. It also stands for the situations of the end of a relationship, sadness, loneliness and turning away, running away, and leaving something. Though, in the long run, the lessons of this card are positive and educational for your life, the overall theme of this card is sad and negative, and that’s why it states a ‘no’ for your question in reading.

But the exception is when you’re asking about leaving a job or a relationship that might be hurting you, the card promptly states a ‘yes’ to that question.

The element of nature associated with the Eight of Cups card is water.

The numerology connected with the Eight of Cups card is 8.

Let go, and abandonment are the major themes of the Eight of Cups card. However, combined with other cards, the meaning and messages of this Minor Arcana card can change and be influenced while in a reading.

Eighth of Cups & The Emperor:

This pair of cards suggest that you’ll soon find fulfillment in self-employment and becoming your boss. If you’ve been passionate about building a business and creating something of your own, now’s the sign to do so. Alternatively, if you’ve been trying to get away from a toxic workplace and colleagues, this pair gives you the thumbs up to do so and embark on a new adventure.

Eight of Cups & The Sun:

This duo indicates you become a leader and take matters into your hand. If you’re feeling discontent and frustrated with your current situation and you want to improve the environment around you and make the world a better place, now’s the time to charter your journey. But this won’t be possible just by showing leadership skills; you have to use your talent and passion to show that you’re worthy of leading and build trust among the people around you.

At first, all this may seem like daydreams and futile efforts, but this will prove beneficial to you in the long run. It doesn’t even have to be grand and grandiose; it can even be as small as a donation or cooking in a shelter as volunteer work. The combination of these cards ensures you that there’ll be smooth sailing ahead.

Eight of Cups & Knight of Wands:

This indicates moving into a new city or town, not necessarily a new place but a place where your dreams will come true. This applies to all aspiring creative people like musicians and artists.

It’s time to let go of self-doubt and worries, follow your passion, and embrace the blazing possibility of being close to where your artistic talents can bloom. But you should keep in mind that success doesn’t come overnight, and if you’re an artist or a musician, just living in Nashville or Los Angeles won’t do you any good and won’t certainly sky-rocket your future. If you put in the work necessary for success, you’re sure to get the results.

The Eight of Cups teaches us a lot about abandonment and hopelessness; these feelings are all too familiar to us, and almost all of us have to experience these at some point in our lives. If we don’t cope with it and let it consume us, we won’t control our lives and reach our dreams. That’s why we should embrace the lessons it teaches us and be mindful of the warnings this card provides us with.