Are you getting confused between the Gilded Tarot or Rider Waite deck?

No problem, here, we will provide the difference, which will remove your confusion.

Gilded Tarot and Rider Waite Tarot are the same structure, and symbols just have the difference in artwork. In the Gilded Tarot, Ciro Marchetti respects Rider-Waite-deck while adding his personal touch. 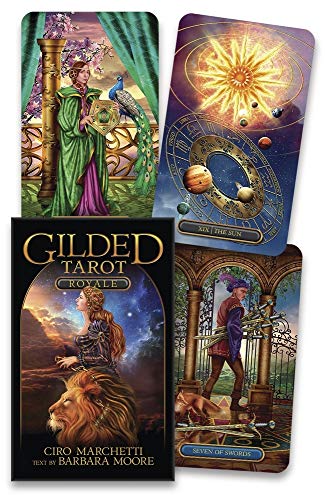 The Number of Cards:

Gilded Tarot is the same as Rider Waite deck, comes with a 22 major arcana, having the same name and number, and the minor arcana also have usual suits; wands, cups, sword, and pentacles. A notable difference between the typical tarot decks is that the background of the minor arcana is not a reflection of the element presented by the suits but rather represents a landscape with occasional planets or moons and stars. In the major arcana “Fool card,” you can also see that the Fool has opened his joke bag and is using what he knows while walking up the zodiac sign, which is different from the traditional Rider-Waite deck.

Other differences are minor; in the magician card, we can see that the magician is holding the symbol of the minor arcana in magic rather than showing up. Another card that differs from the rider-wait is the “lover card” here; lovers are intertwined rather than standing side-by-side. Strength cards also differ here; women are standing with a lion rather than not wrestling with a lion as in the Rider-Waite deck.

You can also see in the devil card a man is wearing a mask rather than not standing side by side by wearing a chain. In the Wheel of Fortune card, we can see that the wheel surrounds animals in the Rider-Waite deck, but animals are not there in the Gilded Tarot. The wheel has become a zodiac sign. In the minor arcana 56 cards, there just have a little difference.

Here, we can see that all the suits and court cards come with little difference in that all the pages are feminine. It is also seen on witches’ tarot and other decks to balance court cards.

So, you have got the idea and know the differences between the Gilded tarot deck and Rider-Waite deck. They have the same symbol. Just realistic faces design was used in the Gilded Tarot deck. One of the good things is that the Gilded Tarot is based on the Rider-Waite for this. You don’t need to know much guidance and meanings for each card. If you are a Rider-Waite reader then, having this Gilded Tarot will be easy for you.