Five of Cups is a card of the Minor Arcana in Latin suited playing cards called tarot decks. The tarot decks are generally used for playing card games, but the cards are used primarily for divinatory purposes in English-speaking countries.

Have a hard time figuring out your tarot reading? We all do. The Five of Cups tarot card always brings up emotions of sadness, loss, regret, and uncertainty. But what if you’re not facing a personal issue in your life? The Five of Cups is a universal symbol that can be seen everywhere, and it appears in many everyday situations.

The Five of Cups card shows a man wearing a long black cloak, cups surrounding him in the middle of the field. He looks down on three of the cups knocked over with tilted back, which shows the hints of sadness and disappointment in his body language.

The three cups which lay on the ground knocked over also remind him of his failures. Behind him, two more cups are standing, representing the new potential and opportunities awaiting him, but he’s so fixated on the cups lying on the ground that the cups standing aren’t near his vision. Thus he misses the opportunities closer to him while wallowing in his loss.

The background of this card features a bridge over a large flowing river filled to the brim with water; the river leads to a castle or a riverbank, which depicts home or accommodation for the man. But he’s too focused on his failure to lead himself to his house. Only if he could let go of the past and build a bridge to his success shown in the card’s backdrop could he get over his disappointment. 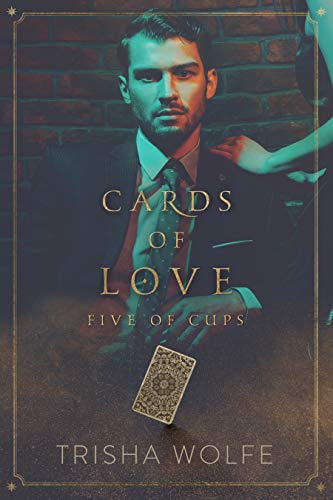 The upright position of this card isn’t a lucky one to get in a tarot reading. Imagine how many negative emotions and feelings one card can depict, and you might have an idea of how deep messages Five of Cups convey.

As its keywords say, the Five of Cups card conveys sadness, disappointment, and feelings of failure over the loss of something. It then comes rage, anger, and feeling of hopelessness and loneliness, which follows after. When this card appears in your reading, it means you’re focusing on the negative and are in despair at the moment over something.

Maybe you’re facing a critical point in your life where you’re finding it hard to stay happy and motivated. This may be because of the loss of a loved one or a lost dream, some sort of trauma, or an unwelcome change in your life that you’ve recently suffered from.

This card may also signify heartbreak, divorce, or separation from your loved one. The card can depict you grieving or mourning over someone. The card is also an indicator that you feel remorse, guilt, or anger for any of your past actions. The emotional baggage you’re carrying keeps your mind in the dark and pulls you toward further sadness.

The reversed position of the Five of Cups card is that of a hopeful one to get in a reading. It means that you’re overcoming the sadness and remorse in your mind and going towards a healthier and smoother path in your life.

It depicts acceptance and letting go of the emotional baggage and trauma haunting you. Your life will definitely turn towards a more positive change from here. As you’ve realized that it would be a waste to spend your life mourning over the past, you’ve concluded that your remorse won’t change the past. But you can hope to work for a better future from now on.

The card indicates that you’ve started to open yourself to people around you, and you’re going, after all, the new and exciting opportunities you can get. Alternatively, the card in the reversed position can signify that your negative emotions haven’t been resolved but have been dragged out for far too long.

The card generally depicts and hints at the positive outcomes most of the time. So if you get this card in your reading, it’s safe to think that your efforts for overcoming your fears and trauma and rejoining the world have proved to be useful.

Five of Cups- Yes or No

The card depicts you feeling at your lowest, perhaps from an intense emotion that has derived from an unexpected and unwelcomed change or traumatic event which occurred in your life. That’s why the Five of Cups indicate a negative connotation and meaning to a question.

It depicts quite a few negative emotions of the human mind like loss, grief, sorrow, sadness, anger, remorse, disappointment, etc. this card is associated with water.

The Five of Cups card is connected to the zodiac sign of Scorpio. The sign of Scorpio is all about delving into the deep and unknown. Scorpio vows to uncover the layers to unearth secrets and crack mysteries. The planets ruling over this sign are Pluto and Mars, which are highly strong, powerful, and energized planets.

The numerology associated with the Five of Cups is 5.

Even when combined with other cards in a reading, the Five of Cups still leave a strong negative message within its meaning depicting loss, grieve, misery or sadness. But the cards surrounding it can bend its meaning, end its message in a hopeful tone and shift its focus to more positive things in life.

That’s why, to get more accurate readings and interpretations, it’s significant to know the different combinations in which Five of Cups can exist in a reading.

Five of Cups & Ace of Cups

This combination hints at the end of an unserious romantic relationship or a fling. The relationship may have come as a shock to you, and it’s probably for the best for you and your partner that it has ended.

The relationship was bound to turn sour and unsatisfying over time for the both of you. That’s why the end of it was necessary. But this pair deviates your focus from the recent separation and implores your to look after yourself and take some time to concentrate on pouring love and affection on yourself and the things you like. Your time for a full-filling and long-lasting relationship will soon surely come.

Five of Cups & Seven of Cups

If you’ve been unsure about a decision you’ve made recently and are starting to regret it, this pair tells you to look for the silver lining of the cloud. Perhaps you’ve decided to change careers, but now you find the job market extremely unhelpful.

Combining these two cards tells you to keep looking and pushing because good times are bound to come. If you don’t take a risk now, then you’ll find yourself in the same spot later down the line.

Five of Cups & Eight of Cups

This pair indicates that it’s time to face your sorrow and sadness and resolve them as necessary for moving on. You won’t let yourself feel close to others if you let the sadness inside you pull you into deeper wallowing. If you let these emotions flow, eventually, you’ll be able to make peace with your remorse and grief and move on to lead a normal life.

Five of Cups & Knight of Cups:

This pair together indicates that you need to end or walk away from your existing relationship. This doesn’t necessarily mean a romantic relationship; it may be a platonic relationship or someone from your family.

You have to look for the signs for a person who’s hurting you, hindering you, or maybe letting you down again and again. It would help if you ended the connection with that person, as that relationship may have toxic after-effects in your life.

Five of Cups depicts many negative emotions, but it’s important to be familiar with the negative sides of our lives and know how to prevent them from leading a better life. It’s normal to feel sad and let down from time to time due to difficulties. But you should find the courage and motivation within yourself to move on from those struggles too.