Six of Cups a card of the Minor Arcana in the Latin suited playing cards. The tarot decks are usually used for playing purposes, but the games aren’t well known across English-speaking countries and are used primarily for divination. The meaning and interpretation of the Six of Cups card are derived from the original Rider-Waite tarot.

The Six of Cups is a tarot card with a beautiful image of a woman holding up a cup. The cups are filled with flowers and are overflowing with water. The woman’s face is serene and she is radiant. The path in front of her is lined with a carpet of flowers and apparently has a fountain or waterfall in the distance. The card is typically associated with romance, joy, peace and comfort.

Maturity, boredom, independence, letting go of the past, focusing on the future, maturity, growing up, leaving home, rose-tinted view of the past, lack of creativity, stagnation, being stuck in the past, resolving childhood issues, childhood abuse, stolen innocence, completing therapy/counseling, moving forward, living in the past, forgiveness, lacking playfulness.

In the card of Six of Cups, a young boy is leaning towards a younger girl and giving her a cup filled with flowers. The look in the younger girl’s eyes is full of admiration, affection, and respect for the boy as he’s offering the flowers to her.

The picture depicts and conveys the lovely traits of love, harmony, and cooperation. These are the key elements and subjects of the Six of Cups’ card, all of which are shining through this one gentle act of kindness and appreciation. The young children depicted in the Six of Cups cards indicate childhood pureness and innocence of boyhood. They also depict our childhood memories.

In the backdrop of the Six of Cups card, we can see an older man walking by away from them in the distance. The older man in the background indicates that you no longer need to worry about the adult issues and enjoy these brief moments of being free, young, and innocent again.

The children appear to be standing in the courtyard of a large home, which symbolizes the comfort and carefree life they have. There are more cups in the foreground filled to the brim with flowers, and the fifth cup stands on a pedestal behind the boy. 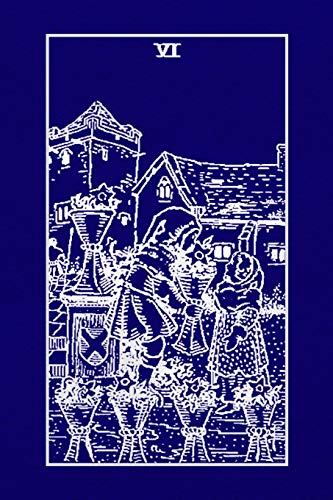 The Six of Cups card is also depicted as children, youth, and young in the Minor Arcana. It can indicate having children or taking care of children. It hints at all the qualities of a carefree childhood, such as playfulness, simplicity, goodwill, sharing, and innocence.

The Six of Cups card also has a strong connection with family, protection, and shelter. Maybe you’ve been going through a tough time and suffering from it; it’s time to seek out help and support from your family or loved ones; they’re the ones who can keep you safe and unharmed. When appearing in a tarot spread, the card can also indicate that maybe you’ve been acting childish or immature. It can also indicate homesickness if you’ve been living away from home or abroad.

In the general context, the reversed position of the Six of Cups can indicate letting go of the past and moving one from memories. It can also indicate growing up and moving away from your home, moving onto the future, or becoming more mature.

If you’ve been actively trying to move on from the effects of your past abuse, like going to therapy or counseling and reaching out for help, the reverse position of the Six of Cups is a good omen as it hints that your efforts are useful. You’re ready for a fresh start.

On another note, the reverse position of the Six of Cups card can indicate that you have an unhealthy obsession and attachment to your past, and you’re unable to let go of the past. Feeling nostalgic is okay, but being stuck in the past and looking at the memories through rose-tinted glass all the time and ignoring the present may not prove to be of benefit to you.

Six of Cups- Yes or No

The Six of Cups cards indicate a strong ‘ yes ‘ question in answering a ‘yes’ or ‘no’ question. The Six of Cups calls attention to our carefree childhood, stress-free optimistic times, and all the joyful memories.

Looking back on our childhood memories, a smile creeps up on our mouths, and we feel a sense of euphoria. As the card’s meanings all depict a positive one, the Six of Cups card gives you a strong ‘yes’ in answer to your question.

Six of Cups symbolizes the Sun with its positive and shining messages depicting childhood. It’s strongly associated with the element water.

The Six of Cups card is strongly associated with the zodiac sign of Scorpio. Scorpio is a water sign, and Scorpions have to experience, express, and face their emotions. Their sign depicts the meaning of re-emerging, transforming, releasing the old, and embracing the new. Scorpio is ruled over by two planets, Mars and Pluto, which are powerfully energized and focused planets.

The numerology associated with Six of Cups is 6.

The positive messages of the Six of Cups card can be seen in Major Arcana cards such as the Empress and the Hermit. So, it’s important to know how this card can change the meaning and depictions in a spread.

Six of Cups & The Empress:

Combining the Six of Cups and Empress cards gives the impression of a loving, nurturing home. This card is a very favorable omen if you’re considering adding a new member to your family. The cards indicate that the home in which the child will grow up will be happy and very functional. You and your partner can move forward on this decision with a sound mind.

Six of Cups & The Hermit:

The Six of Cups and the Hermit card appearing together in a spread indicates that you have to look back on your past now and think about it. Maybe now it’s a great time to write your memoir if you’re a writer. Your memories will be useful, and your words will be impactful and well-received by your audience. It’s good to consider setting some time aside to tell your story, as this pair gives strong affirmation that your story will be a smashing success.

Six of Cups & Wheel of Fortune:

This pair tells you to look back on your childhood and find the motivation and inspiration for you to be on the path you’re supposed to be on. Sometimes, while growing up, we lose the optimism and ambition of the dreams from our childhood. In case you’re feeling stuck in your current career, or maybe you’re unhappy with the path you’ve ended on; so to reconnect with things, you need to take a step back look back on what used to motivate you, what your dreams were, and maybe you can ignite the long lost fiery passion for your dream which is just buried beneath the surface.

Six of Cups & Seven of Wands:

This pair hints at teaching children, and for students, this is a great indicator that being an educator or a career in social services would be a great fit for them. You should go forward to achieve your goals if you are interested in this field.

Six of Cups & Three of Swords:

These two cards together indicate childhood trauma and abuse. If you’re suffering from certain traumatic experiences or memories of abuse from your past, this card suggests that you can’t continue without letting go of these negative emotions anymore. You should seek help in this situation.

The stress of moving on after trauma and abuse is too much for you to handle alone. Trauma recovery can be achieved through various resources, including traditional therapy, support groups, and other social programs. You can overcome anything that ails you with the right support.

We can never forget childhood. It’s also a time of our lives where we can look back for inspiration, nostalgia, and most importantly, to find the motivation to keep moving forward.